In my spare time (IS there such a thing???) this week I’ve been cleaning up the clutter in my garage.

I’ve done it before (actually, I’ve done it several times before) but the clutter keeps coming back. It starts out small. Usually, when I’m in a hurry, I will set something down on the workbench “just until I have time to put it away.”

Of course, I never get around to putting the item where it belongs. And since it looks so lonely out of place by itself, I end up putting other things with it, until I have a jumbled pile of items begging for a home. Even worse, I’ve lost track of what’s in the pile.

Is it any wonder I can’t find what I’m looking for?

I’ve read enough about this syndrome to know I’m not alone. Clutter is rampant in American garages just like mine. 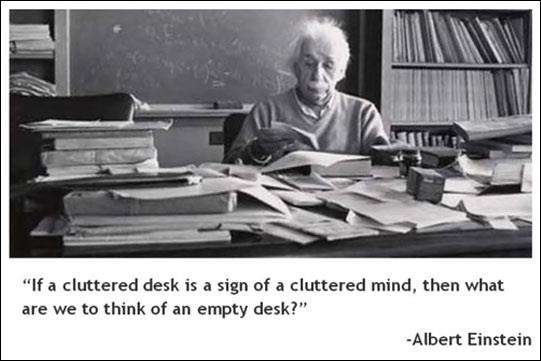 And it’s rampant on American desks, too. Desks like mine.

This is another area where I can show my true colors as a Pile Person. I have piles for everything on my desk, and each pile is important. At least, I think they’re all important. But since I haven’t looked through any of the piles in months, I can’t be sure, because I don’t remember what’s in those piles.

Here’s an example. One pile consists of ten 3.25″ disks. They’re all clearly labeled, so I know they contain information I’m going to need someday. Although neither my PC nor laptop read 3.25″ disks, I still hang on to them, even though the documents they contain are lost forever because I can’t access them because I can’t read the disks. It’s a vicious cycle. 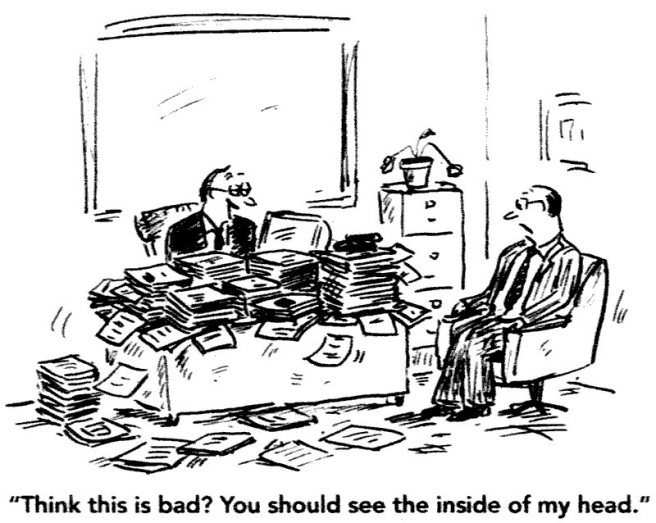 I don’t know why I tend to collect things in piles. I will probably have to invest in a minimum of seven to ten therapy sessions to figure it out.

But I can say that when I get the urge to go through my clutter—as I did this week in the garage—and sort and organize and discard, I feel great!

In fact, I felt so great I immediately rewarded myself with a bowl of ice cream and the words, “You deserve it.”  Maybe ice cream and the chance to strut around the house like a winner is sufficient encouragement to make me tackle all that clutter on my desk.